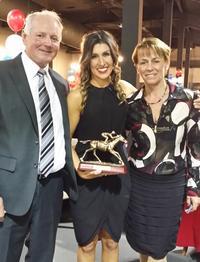 Stable trackwork rider Courtney Pace continued her magical year winning the Picnic Jockey Premiership for the 2014/2015 season. Courtney also received the Barry Ryan Memorial Award which is based on votes cast by Racing Victoria Stewards at every picnic meeting on a 3,2,1 basis. Votes are determined by the ‘the best riding performance of the day’. Recognising the skill and horsemanship of the rider – regardless of the final placing.

We are very lucky to have such an accomplished young rider working our horses each morning and we were on hand at the award night to cheer Courtney on.